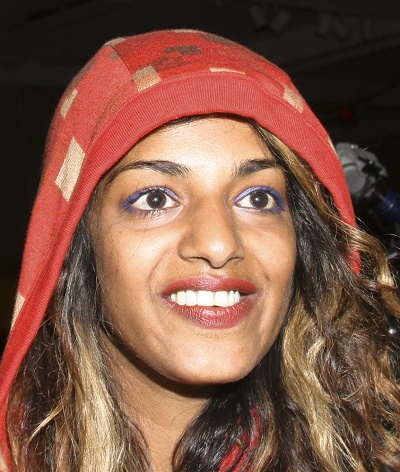 M.I.A. is a British rapper, singer, songwriter, record producer, fashion designer, visual artist, director, model, photographer, and activist. She came to prominence through music file sharing over the internet in 2004.

M.I.A. is the daughter of Kala (Kathirithamby) and Arul Pragasam, “Arular,” an engineer, writer, and activist. Her parents are Tamil Sri Lankans, who were involved in the Tamil independence movement. Her father co-founded the Eelam Revolutionary Organisation of Students, EROS, in 1975 in Wadsworth, England; the group was affiliated with the Liberation Tigers of Tamil Eelam.

M.I.A. spent part of her childhood in Jaffna, Sri Lanka. Her name, M.I.A. (Missing in Action), is after a cousin, Janna, who went missing in Sri Lanka. M.I.A. has strong political views and voices them in her lyrics. Around 1986, her family returned to the U.K., where they were housed as refugees.

M.I.A. has a son with her former partner, Benjamin Bronfman, an environmentalist, who founded the Green Owl record label (his sister is DJ, model, and entrepreneur Hannah Bronfman).