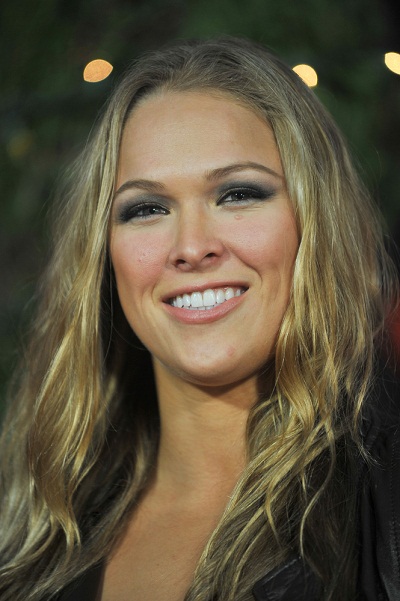 Ethnicity: English, one quarter Trinidadian and Grenadian [including African, Spanish, and English], one sixteenth Polish, as well as German, Scottish, distant Dutch

Ronda Rousey is an American professional wrestler, actress, author, and mixed martial artist and judoka. She is the daughter of Ann Maria Rousey DeMars (born Waddell), a judoka and author, and Ronald John Rousey. Ronda is married to UFC fighter Travis Browne.

Ronda’s maternal grandfather was of Trinidadian and Grenadian descent, including African, Spanish, and English ancestry. Ronda’s other ancestry is English, 1/16th Polish, German, Scottish, and distant Dutch. A picture of Ronda with her mother can be seen here.

Ronda has said that her ancestry is “half venezuelan, a quarter English, a quarter polish, 100% American.” Her reference to “Venezuelan” ancestry likely refers to the fact that the island of Trinidad, where her grandfather’s family was from, is just 11km off the northeastern coast of Venezuela. Ronda’s first three fractions are not quite correct: she is of one quarter Caribbean ancestry, not half, she has English ancestry, to one degree or the other, from all four of her grandparents, and her Polish ancestry is one sixteenth, not one quarter.

Ronda’s paternal grandfather was John Edward Rousey (the son of Clarence James Rousey and Theresa Ellen De Moss). John was born in Illinois. Clarence was the son of Lee or John Henry Rousey and Brunetta Lee Westerfield. Theresa was the daughter of Edward De Moss and Jane Shepard.

Ronda’s maternal grandfather was Joseph Arthur Waddell (the son of Alfred Ernest Waddell and Emelia/Amelia Maria/Mona Castillo). Joseph was born in New York. Alfred was born in Tunapuna, Trinidad and Tobago, the son of Joseph Thomas Waddell, who was born in Hackney, London, England; and of Claudine Angus Abbott, who was from St. Vincent and the Grenadines. Emelia was born in Trinidad, the daughter of Pedro Castillo and Maria Hernandez.

Genealogy of Ronda’s maternal grandmother, Marcella Ann Austin (focusing on her own mother’s side) – http://worldconnect.rootsweb.ancestry.com