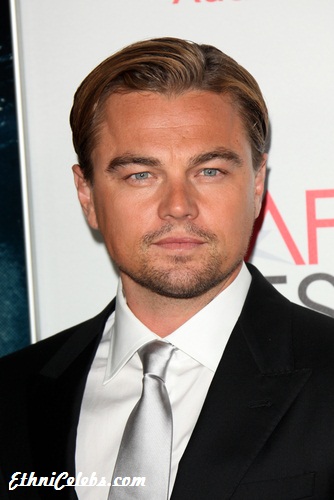 Leonardo DiCaprio is an American actor, producer, and environmentalist. He won the Academy Award for Best Actor for The Revenant (2015). He has also starred in This Boy’s Life, What’s Eating Gilbert Grape, William Shakespeare’s Romeo + Juliet (1996), Titanic, Catch Me If You Can, The Aviator, Revolutionary Road, and Once Upon a Time… in Hollywood, among other films.

He is the son of Irmelin (Indenbirken), a legal secretary, and George DiCaprio, a comic book writer and distributor. His father is of half Italian and half German ancestry, while his mother, a German immigrant, is of German and Russian descent. A picture of Leonardo with his mother and maternal grandmother can be seen here.

He was named Leonardo because he first started kicking inside his mother’s womb when she was viewing a Leonardo da Vinci painting in a museum.

Leonardo’s paternal grandfather was George Leon DiCaprio (the son of Salvatore D. DiCaprio and Rosina Cassella). George was born in New York, to Italian parents. Salvatore was born in Alife, Province of Caserta, Campania, the son of Biase/Biagio Di Caprio/DiCaprio and Maria Emanuela/Emanuele Incagnoli. Rosina was also born in Alife, the daughter of Cipriano Cassella and Camilla Conzales.

Leonardo’s paternal grandmother was Olga Anne Jacobs (the daughter of Paul Jacobs and Bertha Ludwig). Leonardo’s grandmother Olga was a German emigrant, with her family possibly being from Munich, Bavaria.

Leonardo’s maternal grandmother was Yelena/Helene Lisbeth Smirnova/Smirnow (the daughter of Stefan/Stepan Petrovich Smirnov and Irene/Irina). Yelena was of Russian origin, possibly with roots in Mishkinsky District, Bashkortostan. Leonardo’s great-grandfather Stefan was the son of Pyotr/Petr Smirnov.