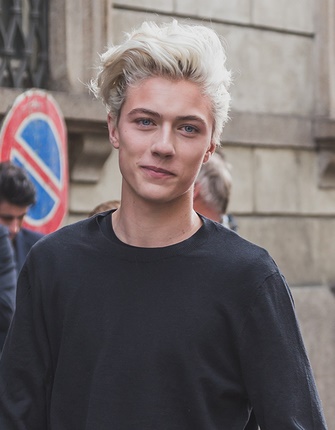 Smith in 2015, photo by tinx/Bigstock.com

Lucky Blue Smith is an American model, actor, and musician. His mother, Sheridan, is a model, and his father, Dallon, is a musician who started a guitar-string company. He is the brother of models and television personalities Starlie Cheyenne Smith, Daisy Clementine Smith, and Pyper America Smith. His family belongs to the LDS (Mormon) church.

Lucky Blue is married to model Nara Pellmann/Pellman. He has a daughter with his former partner, model Stormi Henley; and a daughter with Nara. Stormi was Miss Teen USA 2009.

Lucky Blue’s maternal grandfather was Stephan Alfonso Pia (the son of Alfonso Gerrit Pia and Alice Pauline Wheeler). Alfonso was the son of Frank Pia, who was born in Vienna, Austria, of Moravian/Czech, 1/8th Italian, and likely some German, descent, and of Tryntje/Katheryn/Katherine de Jong, who was Dutch. Alice was the daughter of John Henry Wheeler, whose parents were English, and of Alice Shortman, who was born in Wales, likely to English parents.

Lucky Blue’s maternal grandmother was Pamela Bourne (the daughter of Richard Gordan Bourne and Virginia Cora “Ginnie” Bernstrom). Richard was the son of Harry Heaton Bourne and Bertha Marie Baldridge. Virginia was the daughter of Oliver Conrad Bernstrom, who was born in Utah, to a Swedish father and a Norwegian mother; and of Rhea Lena Snyder, whose maternal grandparents were Danish.