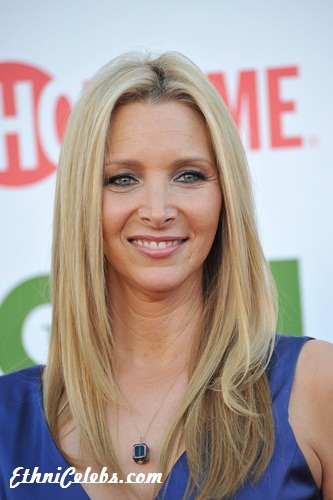 Kudrow in 2011, image via Featureflash / Shutterstock.com

Lisa Kudrow is an American actress, comedian, writer, and producer. She is known for playing Phoebe on the television sitcom Friends.

Lisa was born into a middle class Jewish family (from Belarus, Hungary, and Russia), the daughter of Nedra (Stern) and Lee/Leon Kudrow, a prominent physician who treated headaches. Lisa grew up in Tarzana, California. She was Bat Mitzvah.

On the U.S. version of the show Who Do You Think You Are? (2010), Lisa traced her Belarusian Jewish roots.

Lisa is married to French advertising executive Michel Stern, with whom she has a son.

Lisa’s paternal grandfather was David Kudrow (the son of Gershon/Harold/Harry Kudrow and Bluma/Blanche Rosofsky). David was a Jewish emigrant from Mogilev, Belarus.

Lisa’s paternal grandmother was Grunya/Gertrude Farberman (the daughter of Leo Farberman and Meri/Mera/Mary Aruch/Arouch/Aeroch Kremer). Grunya was a Jewish emigrant from Ilya, Vilna Province, Belarus. Leo was born in Dolginovo, the son of Zelig Farberman and Bertha. Lisa’s great-grandmother Meri was killed in the Holocaust.

Lisa’s maternal grandfather was Henry B. Stern (the son of Jacob Stern and Lottie Weiss). Henry was either a Hungarian Jewish immigrant, or was born in Illinois, to Hungarian Jewish parents.

Lisa’s maternal grandmother was Johanna Sands/Sand (the daughter of Tobias Sandberg/Sand and Anna Sherwindt/Scherwindt). Johanna was born in Germany, to Russian Jewish parents.

Sources: Information about Lisa’s appearance on Who Do You Think You Are? (2010) – http://tracingthetribe.blogspot.com

Genealogy of Lisa Kudrow (focusing on her father’s side) – https://www.geni.com