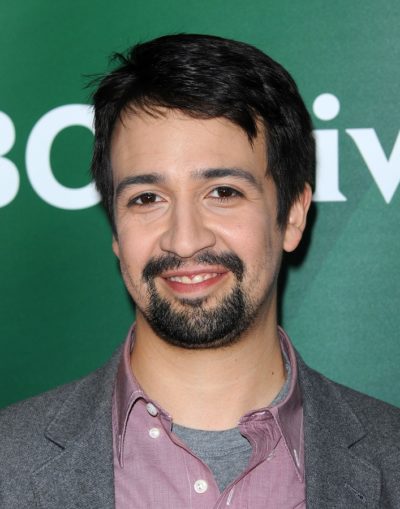 Miranda in 2013, photo by DFree/Bigstock.com

Ethnicity: Puerto Rican [Spanish, as well as Taíno and African], along with approximately one quarter Mexican, more distant African-American and English

He is the son of Luz Towns-Miranda, a clinical psychologist, and Luis A. Miranda, Jr., a Democratic Party consultant. He is married to Vanessa Nadal, with whom he has two children. His name, Lin-Manuel, comes from a poem, “Nana Roja Para Mi Hijo Lin Manuel,” about the Vietnam War, by Puerto Rican writer José Manuel Torres Santiago.

Three of Lin-Manuel’s grandparents were Puerto Rican. His maternal grandfather, a Texan, was of mostly Mexican descent, with his line also including distant African-American and English heritage. Through this line, Lin-Manuel is a descendant of an interracial couple, David Towns, who was white (the son of David Towns and Hannah Fox), and Sophie, who was African-American. David was of Colonial American descent, including among his ancestors soldier and politician Arthur Allen II (c. 1652-1710).

His cousin is Puerto Rican rapper, writer, and filmmaker Residente. His great-great-uncle was lawyer, journalist, author, and politician Gilberto Concepción de Gracia. He was the brother of Lin-Manuel’s great-grandfather Rafael Concepcion de Gracia.

A DNA test whose results Lin-Manuel displayed on his Twitter page stated that his genetic ancestry is:

Genealogy of Lin-Manuel’s maternal grandfather, Pedro Pascual Towns, Jr. (focusing on his own father’s side) – https://www.wikitree.com