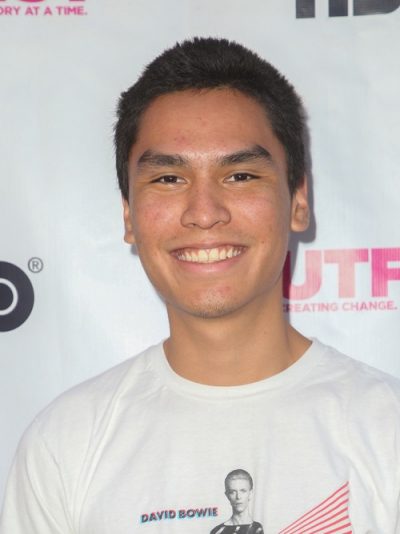 Goodluck in 2018, photo by Prphotos.com

Forrest Goodluck is an American actor. He is known for playing Hawk in the film The Revenant (2015), and Adam Red Eagle in the film The Miseducation of Cameron Post (2018).

Forrest is the son of Laurel/Laurie and Kevin Goodluck.

The Dine is the Navajo nation. Mandan and Hidatsa are people up in North Dakota. And the Tsimshian are in Alaska. My father comes from the Navajo people in Shiprock, New Mexico, in the Four Corners area. That is the Dine, which means “the people” in Navajo. If you ever hear the name of a native tribe it usually translates to “the people” or “human beings.” My grandmother on my mother’s side is from the Fort Berthold reservation in North Dakota – which is the reservation where the Arikara are from. The Arikara, of course, are in The Revenant.

Forrest’s paternal grandmother was Harriet Marie Morgan (the daughter of John Morgan and Mary). Harriet was born in Zuni Pueblo, New Mexico, and was listed as “Indian” on the 1940 U.S. Census.

Forrest’s maternal grandfather was Fredrick/Frederick Earle “Fred” Atkinson (the son of Percy H. Atkinson and Luella/Leuella/Louella Elizabeth Shirai). Fredrick was born in Ketchikan, Alaska. He and his family were listed as “Indian” on the 1940 U.S. Census, and were members of the Tsimshian tribe. Percy was born in Alaska, of Tsimshian Native American, 1/8th French-Canadian, and possibly other European, descent. He was the son of Donald “Don” Atkinson, who was Canadian, and of Emily Maud/Maude Hamilton, who was born in Alaska, to Canadian parents. Forrest’s great-grandmother Luella was born in Alaska, and likely was the daughter of Kichinojo “Harry” Shirai/Shirae, who was Japanese, and of a Tsimshian mother.

One of Forrest’s maternal great-great-great-grandmothers, Lucille Jerome Juriou/Jurie/Zuriet, was born in British Columbia, Canada, to a French-Canadian father and a Tsimshian mother.

Forrest’s maternal grandmother is Dorothy Cross (the daughter of Thomas Martin Olddog Cross and Dorothy Genevieve Bartell). Forrest’s grandmother Dorothy was born in the Fort Berthold reservation, in North Dakota. Thomas was Hidatsa and Mandan, and was the son of Wa- Su- Ka- Di- As Old Dog/Long Time Dog and Akulisishu Many Dances. Forrest’s great-grandmother Dorothy was the daughter of Jesse/Jess Alden Bartell/Bartels, who had British and German ancestry, and of Sina/Sena Andrina Severson, whose parents were Norwegian, from Vangsnes, Vik kommune, Sogn og Fjordane fylke.