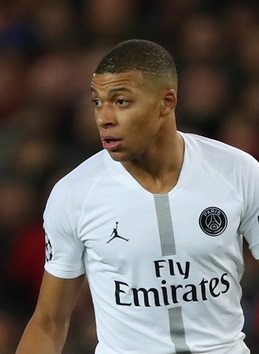 Mbappé in 2019, photo by sportsphotographer.eu/Bigstock.com

Kylian Mbappé is a French professional footballer. At the 2018 FIFA World Cup, he became the youngest French player to score at a World Cup. His transfer fee to Paris Saint-Germain, at €145 million plus €35 million in add-ons, made him the second most expensive player ever, behind teammate Neymar.

He is the son of Fayza Lamari and Wilfried Mbappé. His father is from Cameroon and his mother is Algerian.