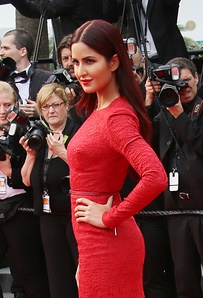 Kaif in 2015, photo by Denis Makarenko/bigstockphoto.com

Her father, Mohammed Kaif, is a British businessperson, of Kahmiri Indian ethnicity. Her mother, Suzanne/Susanna Turquotte/Turcotte, is an English lawyer and charity worker. Her father is Muslim and her mother is Christian. Her sister, Isabelle Kaif, is also a model and actress. Katrina is married to actor Vicky Kaushal.

Katrina modeled in England and India, and was raised in Indonesia and England.

She is not fluent in Hindi, but this has not hindered her work in Bollywood.