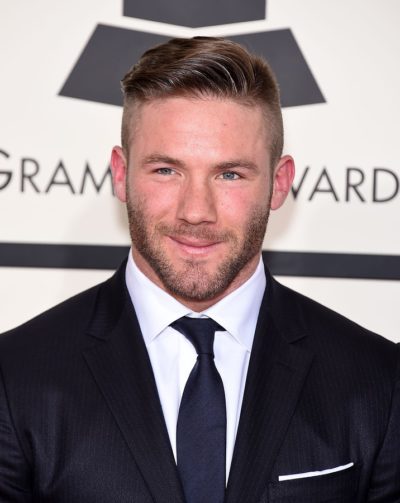 Edelman in 2015, photo by DFree/Bigstock.com

Julian is the son of Angela and Frank Edelman. He has a daughter with his former partner, Swedish model Ella Rose.

His ancestry is German, one eighth Ashkenazi Jewish, one eighth Greek, Irish, English, Scottish, Polish, and Belgian. His mother was born in Kitchener, Ontario, Canada, to Belgian parents who were of mostly German ancestry.

He was not raised in the Jewish religion. Julian practices Judaism now, and describes himself as Jewish, having become a prominent Jewish-American personality in the late 2010s and early 2020s. He grew more interested in the faith during his teenage years, experiencing what he refers to in his autobiography as a “Jewish-awakening.”

A discussion of Julian’s Jewishness by writer Nate Bloom can be read here.

Julian’s paternal grandfather was John Harry/Henry Edelman (the son of Harry Edelman and Mabel/Mable Hennessey/Hennesey). John was born in Illinois, U.S., or in Liverpool, Lancashire, England. Julian’s great-grandfather Harry was born in Wegrow, Węgrów County, Masovian Voivodeship, Poland, to a Jewish family, and was the son of Abraham Edelman and Friema. He was an immigrant to the U.S. Julian’s great-grandmother Mabel was born in Liverpool, England, and was Roman Catholic by religion, and of Irish ancestry; she was the daughter of William Hennesey and Margaret E. Murtaugh.

Julian’s maternal grandfather was Mathias Gole (the son of Rudolf Gole and Angela Travec/Ipouite). Mathias was born in Belgium, and had German ancestry.

Julian’s maternal grandmother was Isolde Gertrude Krawczyk (the daughter of Robert Krawczyk and Charlotte Kuhn). Isolde was born in Genk, Limburg, Flanders, Belgium. Robert was born in Bochum Südwest, Arnsberg, Nordrhein-Westfalen, Germany, the son of Johann Krawczyk and Hermina-Luise Domenig, from Hamburg. Charlotte was born in Pabianice, Łódź Voivodeship, Poland, the daughter of Eduard Kühn and Olga Prüfer, who were of ethnic German descent.