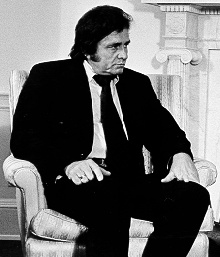 Johnny Cash was an American singer, songwriter, musician, and actor. He was the son of Carrie Cloveree (Rivers) and Raymond Cash.

Johnny was married to dancer, actress, musician, and comedian June Carter Cash, until her death. June was a member of the Carter Family folk music group. He had four children, including singer and songwriter Rosanne Cash, with his former wife Vivian Liberto; and a son with June.

A DNA test of Johnny’s daughter Rosanne whose results were displayed on the show Finding Your Roots with Henry Louis Gates, Jr. (2021) stated that Rosanne’s genetic ancestry is:

During their marriage, Johnny and his wife, Rosanne’s mother Vivian, were often the subject of racist attacks by people who believed that Vivian was a black woman. Genealogical researchers for the show discovered that Vivian was of approximately 1/32 African descent, unbeknownst to the family, with DNA research indicating that Johnny likely had a similar percentage of African ancestry.