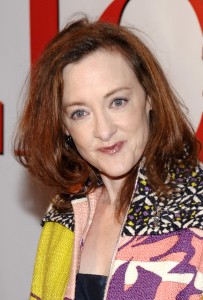 Cusack in 2009, photo by Prphotos.com

Joan Cusack is an American actress. She is the daughter of Ann Paula “Nancy” (Carolan), a teacher and political activist, and Richard John “Dick” Cusack, an actor and filmmaker. Among her siblings are actors Ann Cusack and John Cusack. She was raised in a Catholic family, of Irish descent. She grew up in Evanston, Illinois. Joan has starred in numerous films, including a role as the school principal in the 2003 film School of Rock. Joan is married to attorney Richard Burke, with whom she has two children.

Joan’s maternal grandfather was William Bartholomew Carolan (the son of Patrick Carolan and Ellen Murphy). William was born in Massachusetts, to Irish parents, with his father having been born in Ardlow, Cavan, Ireland. Patrick was the son of James Carolan and Catherine Ann Geoghegan. Ellen was the daughter of Dennis B. Murphy and Catherine Golden.