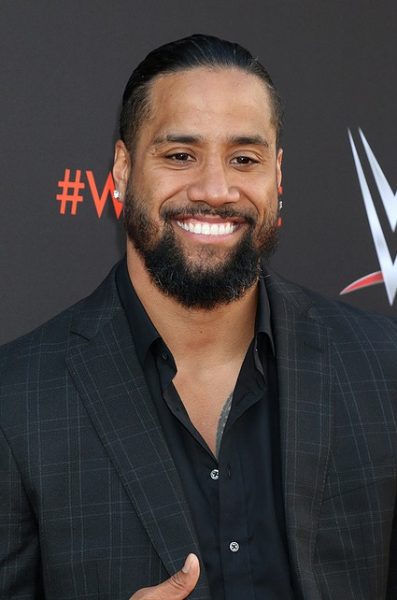 Uso in 2018, photo by kathclick/bigstock.com

Ethnicity: Samoan, as well as 1/32 English

Jimmy Uso is an American professional wrestler. He is known for his work in WWE. He wrestles in a tag team with his twin brother, Jey Uso, who is younger by nine minutes.

Jimmy is the son of Rikishi (born Solofa Fatu) and Talisua Fuavai. His grandparents all moved from American Samoa to San Francisco. He is a member of the Anoa’i family of professional wrestlers. Jimmy’s father, grand-uncles Afa and Sika Anoa’i, his uncle Umaga, and his first cousins, once removed, Yokozuna, The Tonga Kid, Rosey, and Roman Reigns, were/are also professional wrestlers, as is his younger brother, Solo Sikoa. His father also wrestled, under the name Fatu.

Jimmy is married to Naomi, who is also a professional wrestler.

Jimmy’s paternal grandmother was Elevera/Elvira Amituana’i Vila Anoa’i (the daughter of Amituana’i Anoa’i, also known as The Rev. Anoa’i Amituana’i, and of Tovaleomanaia “Tovale” Florence Leoso Ripley). The Rev. Anoa’i was born in Fagaalo, Mauputasi, American Samoa, the son of Ifopo F. Amituana’i and Puaaelo Faagata. He was a pastor in the village of Utulei before moving to San Francisco. Jimmy’s great-grandmother Tovaleomanaia was the daughter of Edward Fepulea’i Leoso “Ned” Ripley, aka Ned Ripley, Jr., and of Tagi’ilima “Tagi” Tisa Li’o. Tovaleomanaia was from Leone, Tutuila, American Samoa. Jimmy’s fourth great-grandfather, Edward V. P. “Ned” Ripley, was an American, from Boston, Massachusetts. He was a secretary to the governor of Tutuila. He was of Colonial American [English] descent.