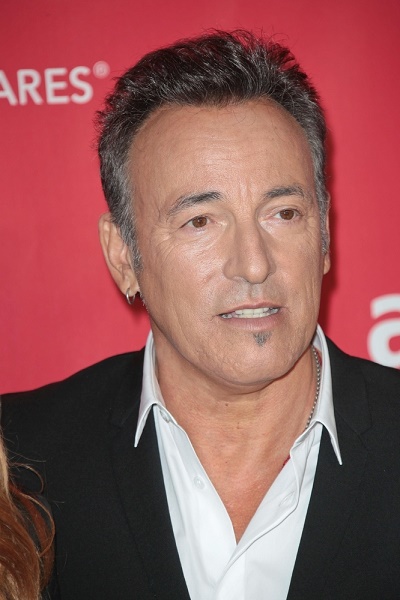 Springsteen in 2013, photo by Prphotos

He is the son of Adele Ann (Zerilli) and Douglas Frederick Springsteen. His father was of at least three quarters Irish ancestry, and also had Dutch heritage. Some of his Irish ancestors were from Rathangan, County Kildare. His mother was of Italian/Sicilian ancestry. His sister is actress and photographer Pamela Springsteen, of the Sleepaway Camp sequels.

He has three children with his wife Patti, including Olympic equestrian Jessica Springsteen.

Bruce’s patrilineal line can be traced to Casper Springsteen, who was born, c. 1620, in Groningen, Netherlands, and to his wife, Geertje “Catherine” Jans.

Bruce’s paternal grandmother was Alice Helena McNicholl/McNicholas/MacNichols (the daughter of John NcNicholas and Jane “Jennie” Farrell). Alice was born in New Jersey. John was the son of Irish parents, Richard McNicholas and Annie Sullivan. Jane was also of Irish descent, and was the daughter of Patrick Farrell and Ann Garrity/Gerrity, who had roots in County Kildare.

Bruce’s maternal grandfather was Antonio A. “Anthony” Zerilli (the son of Raffaele/Raffaela Zerilli and Raffaella Aiello). Antonio, a lawyer, was born in Vico Equense, Province of Naples, Campania, Italy. Raffaele was the son of Andrea Zerilli (1827-1901), who was born in Palma di Montechiaro, Province of Agrigento, Sicily, Italy. In 1852, Andrea married Bruce’s great-great-grandmother Rosa Veniero (1831-1912).

Genealogy of Bruce Springsteen (focusing on his father’s side) – http://www.wikitree.com