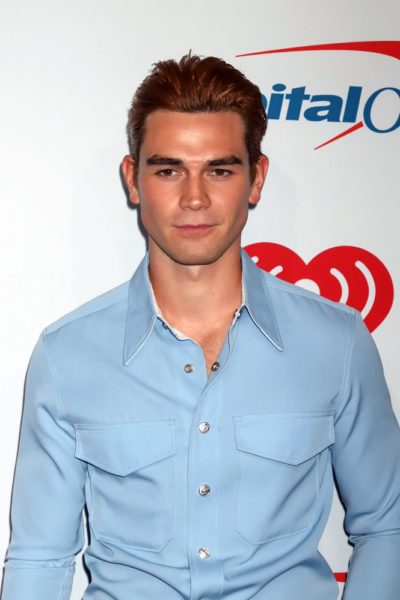 KJ Apa, also known as K. J. Apa, is a New Zealand actor, singer, and musician. He is known for starring as Archie Andrews on Riverdale, and for his roles in the films I Still Believe, as singer Jeremy Camp, The Hate U Give, The Last Summer, and Songbird.

KJ is the son of Tessa Apa, a writer, and Tupa’i Keneti Apa. His sister, Timena Apa, is an actress and model. He has Samoan, English, Scottish/Northern Irish, and Irish ancestry. His Samoan family is from Moata’a. His surname, Apa, may be related to the name of the capital of Samoa, Apia. KJ has a son with his partner, French model Clara Berry.

A picture of KJ with his father can be seen here.

My dad’s father was a high chief … and the family agreed my dad would take over his chief title: Tupa’i… Later, we decided to get a tattoo to commemorate that… I’d love to get my whole body tatted up. I love Polynesian and Samoan designs… The original plan was that this would be the start of a sleeve tattoo, but I think I need to get big arms first…

KJ’s paternal grandmother was Jenny/Janet Fitzgerald (the daughter of Harry Fergus “Bill” Smith and Amy “Tossy” FitzGerald). Janet was born in Wellington. Harry was the son of William Smith and Janet Parkhill Anderson, whose parents were from Hillhousefield, Leith, Scotland. Amy was born in Taumarunui, Manawatu-Wanganui, the daughter of Edward FitzGerald and Florence Spreat Sanderson, whose parents were English, her father from Devon and her mother from Catterick, North Yorkshire. KJ’s great-great-grandfather Edward’s father was James Edward FitzGerald, a New Zealand MP, and Minister of Native Affairs in 1965; whose parents were of Irish origin. KJ’s great-great-great-grandfather James was also the grandson of Richard Fitzgerald and Sir Lucius O’Brien, 3rd Baronet, who were MPs in the Irish House of Commons. KJ’s great-great-grandfather Edward’s mother was born in Odessa, Russia, now Ukraine, to English parents.

…[my father is Samoan]. I have a massive Samoan family. And the Samoan culture has always played a massive part of my life. I’ve got hundreds of family on my dad’s side that live in Samoa and in New Zealand. I’ve just been surrounded by the culture ever since I was a kid. I actually used to speak Samoan, but me and my sisters all kind of lost it. We go there at least once a year to see family. And my dad recently just got a traditional Samoan tattoo. He’s a chief in Samoa, so he got that tattoo to commemorate it.