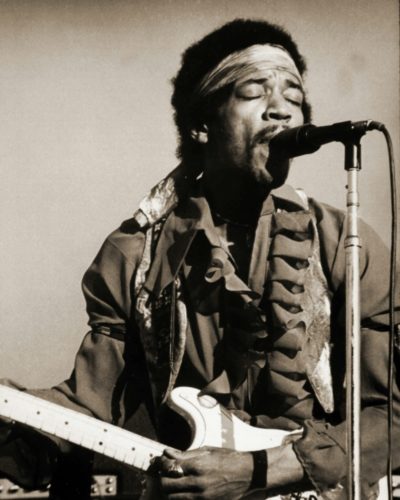 Jimi Hendrix was a legendary American guitarist, singer, and songwriter.

He was the son of Lucille (Jeter) and James Allen Hendrix, both of whom were African-American. Jimi had two children.

Jimi is sometimes described as having had Irish, Native American (often specifically Cherokee), Aztec (specifically Nahua), and/or other ancestry. It is not clear if these lineages have been verified/documented. Jimmy’s recent ancestors were black.

Jimi’s paternal grandmother was Zenora Rose “Nora” Moore (the daughter of Robert J. Moore and Fanny Nealy). Zenora was born in Tennessee or Georgia. Robert was the son of Zenora. Fanny was the daughter of Sandy Neuly/Nealy and Prissy Bostwell.

Jimi’s maternal grandmother was Clarice Larson/Lawson (the daughter of Preston Brown and Laura Larson). Clarice was born in Arkansas or Texas.