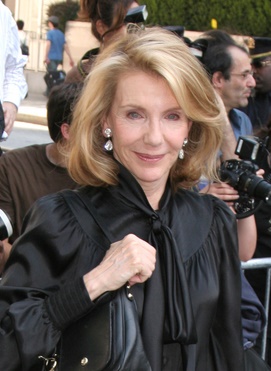 Clayburgh in 2007, photo by Prphotos

Jill Clayburgh was an American actress. She was one of the best known female movie stars of the 1970s, with Academy Award-nominated lead roles in An Unmarried Woman and Starting Over. She also starred in First Monday in October, Silver Streak, and Semi-Tough, among other films.

Jill was the daughter of Julia Louise (Dorr) and Albert Henry Clayburgh. Her father was of German Jewish/Ashkenazi Jewish, and some Sephardi Jewish, descent, with his Sephardi line having been in the United States since the 1700s. Jill’s mother had English, distant Welsh, and remote Dutch, ancestry.

Jill was married to playwright and screenwriter David Rabe, until her death. The couple has two children, actor and playwright Michael Rabe and actress Lily Rabe.

Jill’s paternal grandfather was Albert Clayburgh (the son of Emanuel Clayburg and Evelina/Eveline/Everline Nones). Albert was born in New York. Emanuel was a German Jewish emigrant, from Bergentreich, Westphalia. Evelina was born in New York, the daughter of Aaron Benjamín Nones and Caroline de Leon, and was of Portuguese Jewish, and smaller amounts of French Jewish, English Jewish, and Italian Jewish, descent. Jill’s great-great-great-grandfather, Major Benjamin Nones, was a French Jewish immigrant who fought in the American Revolution.

Jill’s maternal grandfather was Bryan Ripley Dorr (the son of Russell Ripley Dorr and Sarah Louise Bryan). Bryan was born in Minnesota. Russell was the son of Seneca Milo Dorr and Julia Caroline Ripley. Sarah was the daughter of James R. Bryan.

Jill’s maternal grandmother was Edna Evelyn Smith (the daughter of Phineas Mintern/Minturn Smith and Ella Evelyn Phillips). Edna was born in New York. Phineas was the son of Phineas Smith and Temperance Elizabeth Robinson. Ella was the daughter of Edward Roland Phillips, from Arlington, Gloucester, England, and of Phoebe Ann Smith.

Genealogy of Jill Clayburgh (focusing on her mother’s side) – http://worldconnect.rootsweb.ancestry.com