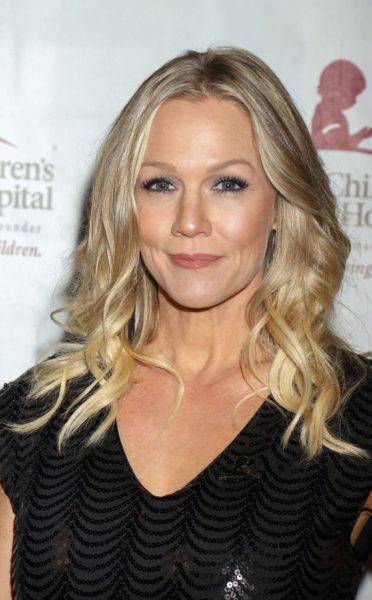 Jennie Garth is an American actress. She is known for her role as Kelly on the series Beverly Hills, 90210.

Jennie is the daughter of Carolyn and John Garth. She was raised partly on a 25-acre horse ranch between Sadorus and Arcola, Illinois, as well as in Tuscola, Illinois and Glendale, Arizona. Jennie is married to actor David Abrams. She has three children with her former husband, actor and producer Peter Facinelli.

Jennie’s paternal grandmother was Millie Pearl Doolin (the daughter of Charles Milburn Doolin and Effie Laura/S. Gibbs). Millie was born in Kentucky. Charles was the son of James W. Doolin and Emily Prudence Kirby. Effie was the daughter of George Gibbs and Elizabeth Thacher Hodge.

Jennie’s maternal grandfather was Carl Dee Hutts (the son of Charles B. Hutts and Myrtle O. Jarred). Carl was born in Indiana. Charles was the son of James William Hutts and Sarah Jane Sample.

Jennie’s maternal grandmother was Jimmie Lee Grieves (the daughter of Roy Grieves and Eva Faye/Fay Rhodes). Jimmie was born in Illinois. Eva was the daughter of Cheney W. Rhodes and Ruth Ann Strain.

Genealogy of Jennie’s paternal grandmother, Millie Pearl Doolin (focusing on her own father’s side) – https://www.ancestry.ca