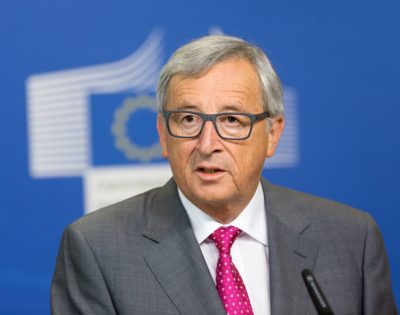 Juncker in 2015, photo by palinchak/Bigstock.com

Jean-Claude Juncker is a Luxembourgish politician and lawyer. He has served as Prime Minister of Luxembourg, from 20 January, 1995 to 4 December, 2013, as a member of the Christian Social People’s Party, among other duties; as well as, as President of the Eurogroup, from 1 January, 2005 to 21 January, 2013, and President of the European Commission, from 1 November, 2014 to 30 November, 2019.

Jean-Claude is the son of Marguerite (Hecker) and Joseph Juncker, a steelworker and union representative. He is married to Christiane Frising.

Jean-Claude speaks Luxembourgish, as well as French, German, and English. He is a Roman Catholic.

Jean-Claude’s paternal grandmother was Elisabeth Bohler (the daughter of Adam Bohler and Suzanne Tholl). Elisabeth was born in Rosport, Echternach, Grevenmacher, Luxembourg. Adam was the son of Michel Bohler and Agatha Knaff. Suzanne was born in Körperich, Vianden, Rhineland-Palatinate, Germany, the daughter of Mathias Tholl and Anne Laesch.

Genealogy of Jean-Claude Juncker (focusing on his father’s side) – https://www.geni.com