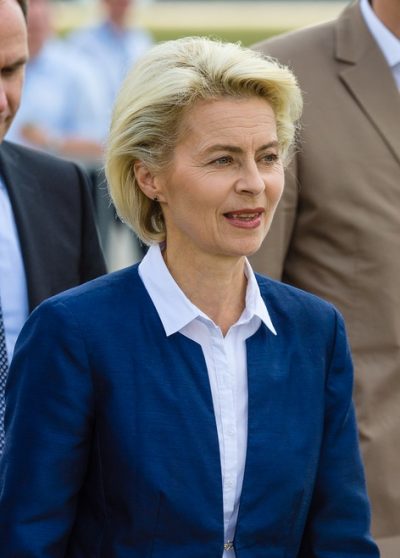 Her mother, Heidi Adele (Stromeyer), was a Germanist.

Ursula is married to physician Heiko Echter von der Leyen, with whom she has seven children.

Ursula’s patrilineal line can be traced back to her thirteenth great-grandfather, Diederik Albrecht.

Ursula’s patenral grandfather was Carl Eduard Albrecht (the son of Friedrich Carl Albrecht and Mary Ladson Robertson). Ursula’s grandfather Carl, who was born in Bremen, Bremen, was a psychologist. He had Baltic German ancestry. Ursula’s great-grandfather Carl Albrecht was a cotton merchant, also from Bremen, Bremen, and was the son of cotton merchant George Alexander Albrecht, who was from an old patrician family, from the Electorate and Kingdom of Hanover; and of Louise/Luise Dorothea Betty “Lullu” Knoop. Ursula’s great-great-grandfather George was the son of Hanoverian lawyer and high-ranking civil servant Karl Franz Georg Albrecht. Ursula’s great-grandmother Mary was an American emigrant, from Charleston, South Carolina, and was the daughter of Edward Twells Robertson and Sara Gilmor Ladson. Among Ursula’s ancestors was politician, wealthy plantation owner, and officer of the American Revolution James Ladson.

Ursula’s matenral grandmother was named Gertrud Emma Margarethe Ohlrogge (the daughter of Richard Ohlrogge and Anna). Richard was a businessperson, who worked in the nautical sector.