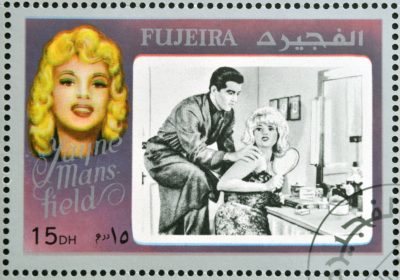 Jayne Mansfield was an American actress, nightclub entertainer, and singer.

Her father, Herbert William Palmer, was of three quarters English/Cornish and one quarter German descent. Her mother, Vera Jeffrey Palmer, was of English and Cornish ancestry.

Jayne had five children: a daughter with her first husband, public relations professional Paul Mansfield; three, including actress Mariska Hargitay, with her second husband, actor and acrobat Mickey Hargitay; and a son with her third husband, film director Matt Cimber.

Jayne’s paternal grandfather was named Elmer E. Palmer (the son of Thomas Palmer and Mary J.). Elmer was born in Pennsylvania, to parents from England. Thomas was born in Cornwall.

Jayne’s paternal grandmother was Alice J. Jackson (the daughter of William H. Jackson and Amanda Whitzman/Custer). Alice was born in Pennsylvania, to an English father, from Cornwall, and a mother of German origin. William was the son of William Jackson and Jane. Amanda was the daughter of Michael Custer and Lovina.

Genealogy of Jayne Mansfield (focusing on her mother’s side) – https://www.wikitree.com