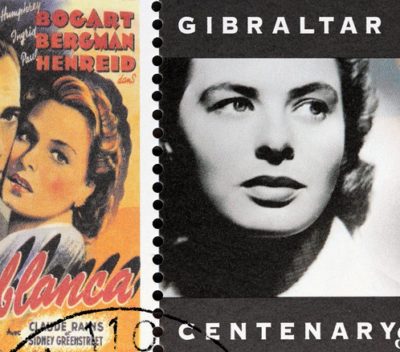 Ingrid’s paternal grandfather was Johan Peter/Petter Bergman (the son of Jonas Månsson and Marta/Martha Jönsdotter/Jönasdotter). Johan was born in Öja, Kronoberg, Sweden. Jonas was the son of Måns Jöhasson and Ingeborg Jönsdotter. Marta was the daughter of Jöns Johansson.

Ingrid’s paternal grandmother was Britta/Brita Sofia/Sophia Samuelsdotter (the daughter of Samuel Lorentz Bengtsson and Maria Andersdotter). Brita was born in Väranås, Hjälmseryd, Jonkoping County, Sweden. Samuel was the son of Bengt Christoffer Samuelsson, an innkeeper, and of Brita Sophia Runquist/Hielmberg. Maria was the daughter of Anders Svensson and Lisbeth Amundsdotter.

A DNA test of Ingrid’s daughter Isabella whose results were displayed on the show Finding Your Roots with Henry Louis Gates, Jr. (2019) stated that Isabella’s genetic ancestry is:

According to the book, Ingrid Bergman, A Personal Biography (2007), by Charlotte Chandler, Ingrid was told by her mother’s sister, Elsa Adler, that her family had Jewish ancestry. Given her daughter Isabella’s DNA test, Ingrid having had significant Ashkenazi Jewish ancestry is unlikely.

Sources: Genealogies of Ingrid Bergman (focusing on her father’s side) – http://www.geni.com
http://www.wikitree.com