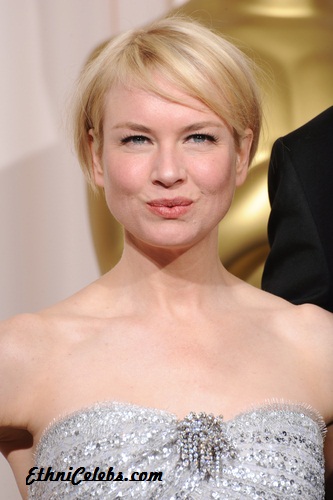 Renée Zellweger is an American actress and producer. She won the Academy Award for Best Supporting Actress for Cold Mountain (2003), and the Academy Award for Best Actress for Judy (2019). Her roles also include Chicago, Jerry Maguire, One True Thing, Nurse Betty, Bridget Jones’s Diary and its sequels, Cinderella Man, Appaloosa, What/If, Miss Potter, and The Texas Chainsaw Massacre: The Next Generation.

Renée’s father, Emil Erich Zellweger, was born in Au, a town in the canton of St. Gallen, Switzerland, and has Swiss-German ancestry. He is said to descend from an Appenzell noble family. Renée’s mother, Kjellfrid Irene (Andreassen), was born in Norway, of Norwegian, as well as Finnish/Kven, Swedish, Tornedalian, and remote Danish, German, and Scottish, ancestry. She grew up in Ekkerøy near Vadsø, and in Kirkenes, and came to the U.S. to work for a Norwegian family.

Some of Renée’s mother’s ancestors were from Sodankylä in northern Finland. During the 19th century, many Finns emigrated to Finnmark, in northern Norway; they are known as Kven, and both of Renée’s maternal grandparents were of part Kven descent.

Several internet sources state that Renée has Sami ancestry. It is not clear if this ancestry has been verified/documented. None of Renée’s recent or relatively recent ancestors are listed as Sami on Norwegian census records. Sami are Indigenous people who inhabit Norway, Finland, and Sweden.

Renée’s maternal grandmother was Bjørga Johanna/Johanne Hildonen (the daughter of Isak Wilhelm Johansen Hildonen and Kathrine Jensdatter Hedlund). Bjørga was born in Tana, Norway. Isak was the son of Johan Daniel/Danielpoika/Danielsen/Danielinpoika Hiltuen/Hiltunen/Hildonen, who was born in Kairala, Pelkosenniemi, Finland, and of Johanne Kathrine Johannestyttär/Johansdatter Kylmänen/Kullmann, who was born in Kvalsund, Finnmark, Norway, and had Finnish and Tornedalian ancestry. Renée’s great-grandmother Kathrine was born in Vefsn, Norway, the daughter of Swedish parents, Jens Paulsen Hedlund, from Härjedalen, Jämtland, and Brita Isaksdatter Bergstrøm, from Åre, Jämtland.