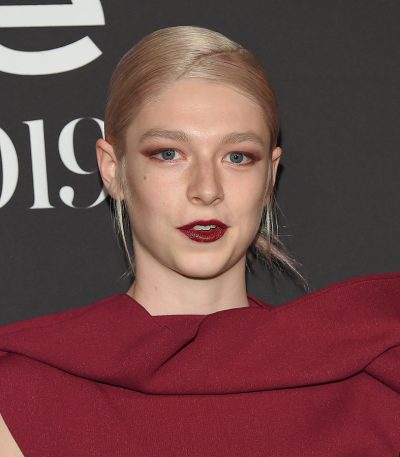 Hunter Schafer is an American actress, fashion model, and LGBTQ rights activist. She is known for her role on the show Euphoria.

Hunter is the daughter of Katy and The Rev. Mac Schafer, a Presbyterian minister. The family moved between churches and congregations in New Jersey, Arizona, and then Raleigh, North Carolina. Her last name is usually German. Hunter is a transgender woman.

Hunter’s paternal grandfather was Carl Walter Schafer (the son of MacHenry George Schafer and Gertrude Herrick). Carl was born in Chicago, Illinois. MacHenry was the son of Carl Wilhelm Schafer, whose parents were German, and of Viola Etulyn Boardman, who had deeper lines in the U.S. Gertrude was the daughter of Walter Dwight Herrick and Gertrude Gouverneur Cotsworth, and had some partially deep ancestral lines in the U.S.

Hunter’s paternal grandmother was June Elizabeth Perry (the daughter of James Jackson “Jim” Perry and Ferris Hathaway Missimer). June was born in Tennessee, and had partially deep roots in the U.S. James was the son of Nathaniel/Nat T. Perry and Mary E. Jackson. Ferris was the daughter of Harry Elmer Missimer and Ruby Irene Hathaway.