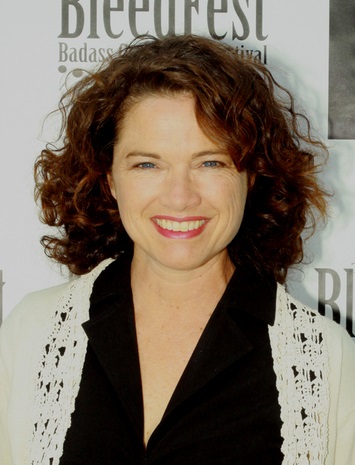 Langenkamp in 2011, photo by Prphotos.com

Heather Langenkamp is an American actress, producer, and prosthetic makeup coordinator. She is known for her lead role in the A Nightmare on Elm Street films.

Heather is the daughter of Mary Alice (Myers), an artist, and Robert Dobie Langenkamp, a petroleum attorney. Her father served in the Carter and Clinton administrations, and Heather was partly raised in Washington, D.C. Heather is married to Academy Award-winning makeup artist David LeRoy Anderson, with whom she has two children. She has also been credited as Heather Langenkamp Anderson, Heather L. Anderson, and Heather Anderson.

Heather’s paternal grandmother was Mary Bell/Marybelle Dobie (the daughter of David Leslie Dobie and Mary Claire/Clara Keeley). Marybelle was born in Wisconsin. David was the son of David Dobie and Isabella Logie, who were from Huron, Ontario, Canada. Mary Claire was the daughter of Daniel Patrick Keely, who was Canadian, and of Mary Ellen/Emma Miner.