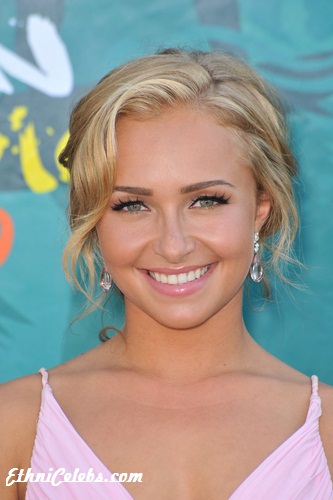 Panettiere in 2009, photo by Featureflash / Shutterstock.com

Hayden Panettiere is an American actress, model, singer, and activist. She is known for starring in the series Heroes as Claire Bennet.

She is the daughter of Alan Panettiere and Lesley R. Vogel, an actress. Her brother is actor Jansen Panettiere. She has a daughter with her former partner, Ukrainian boxer Wladimir Klitschko.

Both of Hayden’s parents are of half Italian descent (her father’s father and her mother’s mother). Her other roots include German and English. Her surname, Panettiere, is pronounced Pan-Uh-Tee-Air-Ee, and means “baker” in Italian. She has a tattoo of the Italian words Vivere senza rimipianti on her left flank. It means “To live without regrets”, although the third word should be spelled rimpianti.

Hayden’s paternal grandfather is Dominick N. Panettiere (the son of Donato/Daniel Panettieri/Panettiere and Jacomina/Jaicomina Signorile). Dominick was born in New York, to Italian parents. Donato was born in Altamura, Bari, the son of Carlo Panettieri and Leonarda Oliva.

Hayden’s maternal grandmother is Eunice B. “Tam” Latty (the daughter of Salvino/Salvin Frank Latty and Rose/Rosyln L. Shaw). Eunice was born in Maine, to Italian parents. Rose was the daughter of Joseph Shaw and Maria/Mary Pagoni.