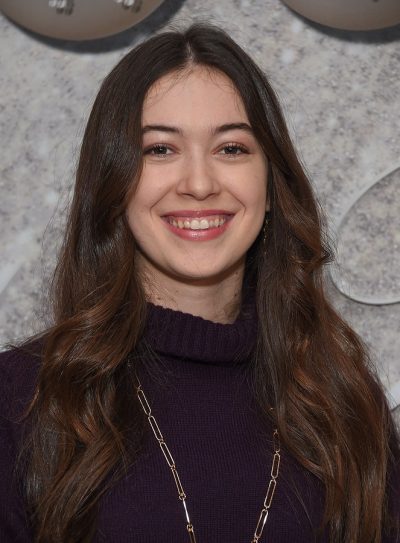 Kaufman in 2019, photo by DFree/Bigstock.com

Grace Kaufman is an American actress. She is known for her roles on the series Man with a Plan, Bad Teacher, The Last Ship, and Whisker Haven Tales with the Palace Pets.

She is the daughter of actors Lisa Picotte and David Kaufman.

Grace’s paternal grandfather is Richard J. Kaufman (the son of Harry Kaufman and Ruth Silver). Harry was the son of Russian Jewish parents, Max Kaufman and Dora/Dwojre Wittenburg. Ruth was the daughter of Joseph Silver, whose parents were Russian/Polish Jews, and of Bertha/Betti Fromet, who was a Hungarian Jew.

Grace’s paternal grandmother is Judith Ann Pfeiffer (the daughter of Frank Pfeiffer and Anna Louise Risch). Frank was the son of Nickolaus Pfeiffer and Katarina Wolf, who were ethnic Germans from Hungary. Anna was the daughter of John Risch and Louise Kellman; Grace’s great-great-grandfather John was the son of Christian Risch, who was born in Waltensburg, Switzerland, of Swiss-Romansh descent, and of Anna Schmid, who was born in Mals, South Tyrol, Italy, of Austrian ancestry. Grace’s great-great-grandmother Louise was the daughter of Otto Kellman, who was German, and of Ellen Ritchie, whose parents were Scottish.

Grace’s maternal grandfather was Eugene Melvin “Gene” Picotte (the son of Joseph Charles Elie Picotte and Olive Catherine Reaume). Gene was born in Windsor, Ontario, Canada, of French-Canadian descent. Joseph was the son of Napoleon Picotte and Angele Marchildon. Olive was the daughter of Alexander Reaume and Mary Agnes Tremblay.

Grace’s maternal grandmother is Anne Marie Cartier (the daughter of Laurent/Laurence Armand Cartier and Laura/Laula/Lillian Mary Deziel). Anne was born in Michigan, to French-Canadian parents, from Ontario. Laurent was the son of Francis Cartier and Valerie Tetreault. Laura was the daughter of Joseph Déziel and Levina Ladouceur.

Sources: Genealogy of Grace Kaufman (focusing on her father’s side) – https://gw.geneanet.org