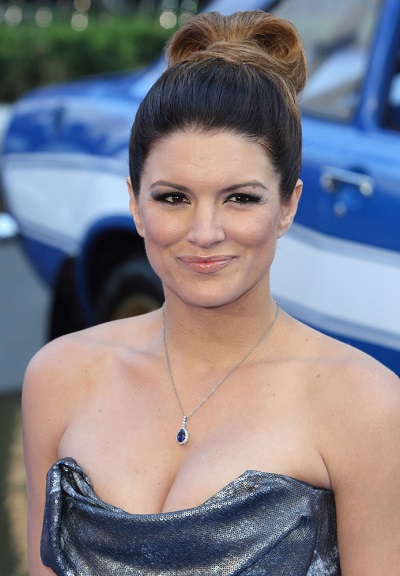 Gina Carano is an American actress, television personality, fitness model, MMA fighter, and American Gladiator. She is the daughter of Dana Joy (Cason) and Glenn Thomas Carano, a professional football player. She is also known as Conviction and Crush.

Gina stated in an interview that she is a fourth-generation Italian American, and has “just a small percentage of Italian” ancestry. Her ancestry is, specifically, three sixteenths (3/16ths) Italian. Her other roots are English, Scottish, and smaller amounts of Scots-Irish/Northern Irish, Dutch, and German.

Gina’s maternal grandfather is Jack Edward Cason (the son of Vernon Dewey Cason and Dallas Smock). Jack was born in Oklahoma, and is a member of the UNLV Athletics Hall of Fame. Vernon was the son of Edward M. Cason and Maude E. Harrison. Dallas was the daughter of James Smock and Melissa.

Gina’s maternal grandmother is Maxine Yvonne Cobb (the daughter of Theo Franklin Cobb and Julia Elizabeth Johnson). Maxine was born in Oklahoma. Theo was the son of Franklin David Cobb and Hattie Gertrude Garrison. Julia was the daughter of Alfred Thomas Johnson and Nettie Maybur Reasoner.