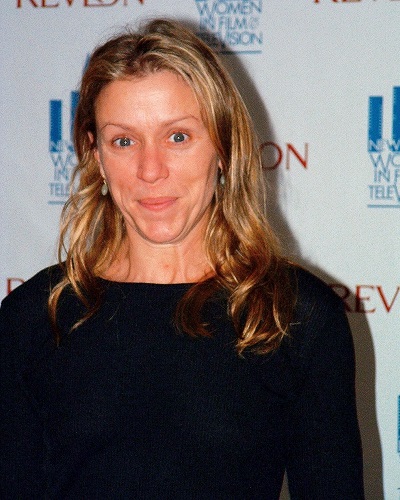 McDormand in 2002, photo by Prphotos.com

Frances McDormand is an American actress. She has thrice won the Academy Award for Best Actress, for Fargo (1996), Three Billboards Outside Ebbing, Missouri (2017), and Nomadland (2020). She has also won a Tony and an Emmy, alltogether the Triple Crown of acting. Her roles also include Something’s Gotta Give, North Country, and Isle of Dogs, among many others.

Frances was adopted by a Canadian-born couple, Noreen Eloise (Nickleson), a nurse, from Ontario, and The Rev. Vernon Weir McDormand, a Disciples of Christ pastor, from Nova Scotia. They had no biological children. The Rev. Vernon traveled around the U.S. restoring congregations, and as a result Frances lived in Illinois, Georgia, Kentucky, Tennessee, and Monessen, Pennsylvania. Her adoptive sister is also a Disciples of Christ pastor.

Frances is married to director, screenwriter, and producer Joel Coen. The couple has a son. Their son was adopted from Paraguay.

Frances has said that her biological mother may have been one of the parishioners at Vernon’s church.

The Rev. Vernon McDonald was the son of William Harry McDormand and Fannie May/Mae Moore. William and Fannie May were born in Nova Scotia.