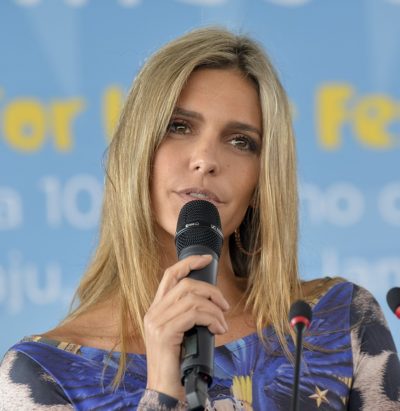 Lima in 2014, photo by Celso Pupo/bigstockphoto.com

Fernanda Lima is a Brazilian actress, model, and television host and presenter. She was the muse of the 2014 FIFA World Cup.

Fernanda was born in Porto Alegre, Brazil, the daughter of Maria Tereza Cama Pereira, who is from Rio Grande do Sul, and Cleomar Antônio Pereira Lima, who is from Rio de Janeiro. She is married to Brazilian actor, television host, and model Rodrigo Hilbert, with whom she has three children.

The surname Pereira is of Portuguese origin. Her Portuguese roots include Azorean.

Fernanda stated during her television show Amor & Sexo that her great-great-grandfather was Catalan. Fernanda’s parents are pictured here.