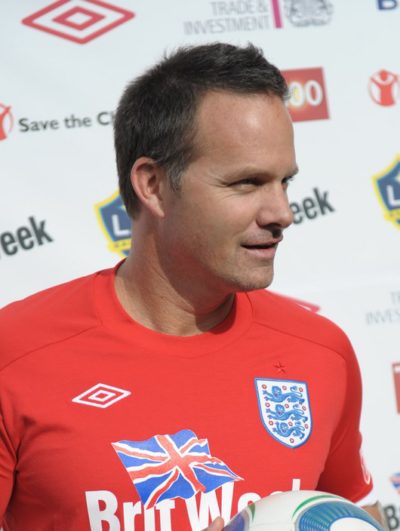 Eric Wynalda is an American soccer player and coach, and television commentator.

Eric is married to Amanda Fletcher. He has three children.

Eric’s paternal grandfather was Alvin Wynalda (the son of Martin Wynalda/Wynalder and Katherine/Catherine/Tryntje Bergsma). Alvin was born in Arum, Friesland, Netherlands. Martin was the son of David Wynalda and Margaret Jacobs Hemstra.

Eric’s paternal grandmother was Della Rykse (the daughter of George Rykse and Anna De Ruiter/DeRuiter). Della was born in Michigan, of Dutch descent. George was the son of Willem Rykse. Anna was the daughter of Anneko DeRuiter and Jantje Oostema.

Eric’s maternal grandmother was Naomi Jean Moss (the daughter of Sidney Lee Moss and Flora Lee Benham). Sidney was the son of Thomas Wallace Moss and Mollie Coker. Flora was the daughter of William Robert Benham and Myrtle Agnes Hogan.