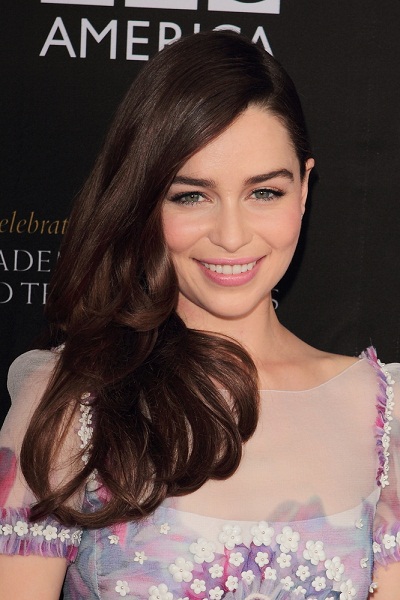 Ethnicity: English, one eighth Indian, as well as possibly around 1/16th German, some Welsh

Emilia Clarke is an English actress. She has starred as Daenerys Targaryen on Game of Thrones, and had leading roles in the films Terminator Genisys, Me Before You, Solo: A Star Wars Story, Last Christmas, and Above Suspicion.

Her father, Peter Roderick Clarke, was a theatre sound engineer. Her mother, Jennifer Susan “Jenny” Clarke, is the director of The Anima Foundation, a charity aimed at helping young people in Ghana.

Emilia has said that her maternal grandmother’s biological father was an Indian man with whom her own mother had had an affair. She specified:

The fact that [my grandmother] had to hide her skin color, essentially [by wearing makeup], and try desperately to fit in with everyone else must’ve been incredibly difficult… So, yeah: history of fighters.

Emilia’s paternal grandfather was Leonard Clarke (the son of Albert Clarke and Mary Southall). Leonard was born in Wolverhampton, Staffordshire, England. Albert was the son of William Clarke and Sarah Ann Babb. Mary was the daughter of Benjamin Southall and Mary Ann Keay.

Emilia’s maternal grandfather was Raymond Dodd (the son of Bennett Dodd and Harriet/Harriett Isabella Watson). Raymond was born in Darlington, Durham, England. Bennett was the son of George Dodd and Mary Jane Swan. Harriet was the daughter of Thomas Watson and Ann Elizabeth Robinson.

Emilia’s great-grandmother Anna was married to Frederick Ninian Wrack, but Emilia’s statement appears to indicate that Frederick is not her biological great-grandfather. Frederick was born in Sahibganj, Bengal, India, the son of George Frederick Wrack and Margaret Ann Mooty.

Sources: Genealogy of Emilia Clarke (through her brother, Bennett) – http://reocities.com