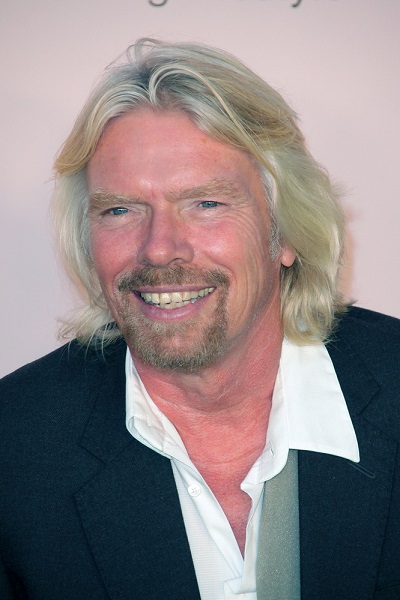 Branson in 2009, photo by Prphotos.com

Sir Richard Branson is a British business magnate, investor, and philanthropist. He is known as the founder of Virgin Group. Richard is the son of Eve Branson (born Evette Huntley Flindt), a ballet dancer, air hostess, philanthropist, and child welfare advocate, and Edward James Branson, a barrister. Richard is married to Joan Templeman, with whom he has three children. His nephew (sister’s son), businessperson Ned Rocknroll is married to actress Kate Winslet.

Richard has English, Welsh, 1/32 Indian, 1/64 German, and distant Irish, ancestry. His great-great-great-great-grandfather, Gustav Flindt, was German. Some of his ancestors were born in Madras, India.

Richard’s paternal great-great-grandmother, Eliza Cornelia Wilson Wellington Reddy, was born in India, to a man named Luke Reddy, and to a mother who was not listed on Eliza’s birth certificate. A DNA test whose results were displayed on the show Finding Your Roots with Henry Louis Gates, Jr. (2016) stated that Richard’s genetic ancestry is:

Thus, it was speculated on the show that Eliza’s mother was Indian, leading to Richard’s DNA result, and him having 1/32 Indian ancestry.

Richard’s paternal grandmother was Mona Joyce Bailey (the daughter of George James Bailey and Edith Emma Headley). Mona was born in Taynuilt, Argyllshire. George was the son of George Bishop and Jane. Edith was the daughter of Alexander Headley and Lucy Emma Waddelow.

Richard’s maternal grandfather was Rupert Ernest Huntley Flindt (the son of Sydney Henry Flindt and Louisa Maria Cornwall). Rupert was born in West Norwood, London, Middlesex. Sydney was the son of Henry Julius Flindt and Fanny Elizabeth Chaplin. Louisa was the daughter of The Rev. Richard Neville Cornwall, who was born in Dublin, Ireland, and of Maria Isabella Hamilton.