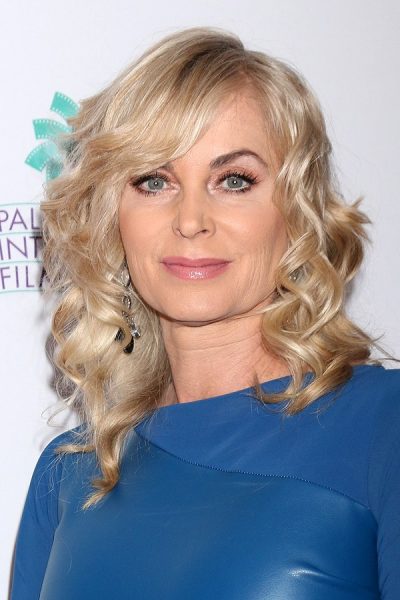 Davidson in 2019, photo by kathclick

Ethnicity: German [including Swiss-German], as well as 1/16th Irish, smaller amounts of English and Scottish

She is married to professional tennis player, poker commentator, and actor Vincent Van Patten, with whom she has a son.

Eileen’s paternal grandfather was James Leo Davidson (the son of Ira Lincoln Davidson and Emma Jane Littler). James was born in Seneca, Ohio. Ira was the son of William Davidson, whose parents were Irish, and of Maria Morrison, who had Scottish and English ancestry. Emma was the daughter of Nathan Littler and Mary Engler, and was of German, English, and Swiss-German ancestry.

Eileen’s paternal grandmother was Eugenia H. Diemer (the daughter of William Phillip Diermer and Maria B. Burkart). Eugenia was born in Tiffin, Seneca, Ohio. William was the son of Godfrey/Geoffroi Jacques Diemer, who was an Alsatian immigrant, and of Gertrude Catherine Werner, who was born in Ohio. Maria was the daughter of German emigrants, from Baden-Württemberg, Wendelin/Wendelyn Burkart, from Vimbuch, and Bertha Stippich, from Sulz.

Eileen’s maternal grandfather was Albert Edward Burkhart (the son of John Adam Burkhart and Sophia Bergmann). Albert was born in Miltonsburg, Ohio. John was the son of German emigrants, Adam Burkhardt, from Bavaria, and Barbara Burkhard, from Pfalz. Sophia was also the daughter of German parents, Lorenz Bergmann, from Sailauf, Bavaria, and Anna Maria Imhoff.

Eileen’s maternal grandmother was Dora Victoria Elizabeth Birkmeyer (the daughter of Maximillian Clemens Birkmeyer and Catherine Bernadine Desch). Dora was born in Coldwater, Ohio. Maximillian was the son of Joseph Birkmeyer, whose parents were from Switzerland and France, respectively, and of Maria Anna Elizabeth Hausfeld, whose parents were German, from Haverbeck, Oldenburg. Catherine was the daughter of Casper Desch and Mary Roeckner, who were born in Ohio, both of them to German immigrants.