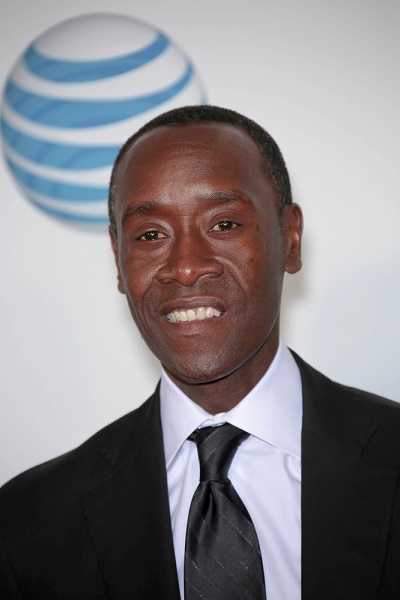 Cheadle in 2013, photo by Prphotos

Don Cheadle is an American actor, writer, producer, and director. He is the son of African-American parents, Bettye (North), a teacher, and Donald Frank Cheadle, a clinical psychologist. He has two children with his partner, actress Bridgid Coulter.

Don’s paternal grandfather was Lee Therman Cheadle (the son of William M. Cheadle and Maggie/Odie Lewis). Lee was born in Oklahoma. William was the son of Henderson Hence Cheadle and Mary Kemp. Maggie was the daughter of Henry Lewis and Caroline.

Don’s paternal grandmother was Cynthia Barnes (the daughter of Joseph Smith Barnes and Clennie Carroll). Cynthia was born in Missouri.

Don’s maternal grandfather was Basil Leon/W. North, Sr. (the son of Horace P./Marion North and Rachel S. Kenoly). Basil was born in Missouri. Horace was the son of John Ralls. Rachel was the daughter of Myers Kenoly and Mary Mathilda, who were born into slavery.

A DNA test whose results were displayed on the show African American Lives 2 (2008) stated that Don’s genetic ancestry is:

In his 2009 book about the show, In Search of Our Roots: How 19 Extraordinary African Americans Reclaimed Their Past, Henry Louis Gates, Jr. wrote that 45% of Don’s African DNA matches Benin and western Nigeria, including specifically the Ewondo, Bamileke, Masa, and Tikar people, 30% matches Upper Guinea (Senegal to Liberia), and 25% matches the Congo-Angola region.