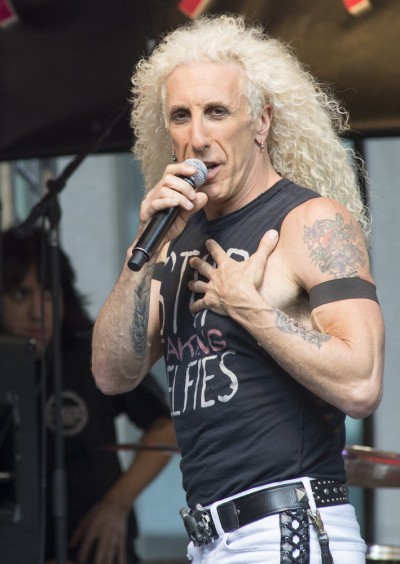 Snider in 2014, photo by Prphotos.com

Dee Snider is an American singer, songwriter, musician, radio personality, and actor. He is the lead singer of the heavy metal band Twisted Sister.

He is the son of Marguerite, an art teacher, and Bob Snider, a former New York state trooper and Mineola court clerk. He is married to costume designer Suzette, with whom he has four children, including comic book writer and voice actor Jesse Blaze Snider.

His father was Jewish. His mother was born in New Jersey, to Swiss parents, of Swiss-German descent. Dee was raised Episcopalian.

My mother taught the sixth-grade Sunday-school class at my church. A devout Christian woman, born and raised Roman Catholic by her Swiss parents, she went to church every Sunday of her life… until the day she married my formerly Jewish dad.

In the same book, he wrote:

The guys were tired of my abuse (I thought it was dressing-room banter!) and voted—unbeknownst to me—that I could no longer participate in the exchange of insults between band members. Supposedly my lack of giving a shit, and my Swiss-Ukrainian-Transylvanian heritage, left little for the guys to work with when they retaliated.

So was my grandmother! Transylvanian actually!… I’m Hungarian! :) I’m sure you did great!

Well, my grandmother was from Transylvania! (for real)

He was likely referring to his paternal grandmother. Transylvania, Romania, is home to the Hungarian-speaking ethnic minority in Romania, also known as Székelys. Dee’s father was likely of Ukrainian Jewish and Hungarian Jewish descent.

Dee’s maternal grandfather was Franz/Frank Joseph Schenker (the son of Jakob Schenker and Rosalia Rame). Franz was born in Walterswil, Bern, Switzerland. Jakob was the son of Josef Schenker and Anna-Maria Grutter. Rosalia was the daughter of Jacob Schenker and Theresia Junz.

Genealogy of Dee Snider (focusing on his mother’s side) – https://www.geni.com