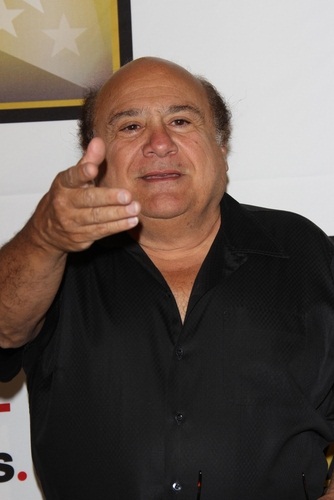 DeVito in 2011, image via s_bukley / Shutterstock.com

Danny DeVito is an American actor, director, producer, and screenwriter. His roles include One Flew Over the Cuckoo’s Nest, Terms of Endearment, Ruthless People, Twins, Batman Returns, Get Shorty, Big Fish, Throw Momma from the Train, The War of the Roses, Hoffa, and Matilda, the latter four of which he also directed, and the shows Taxi and It’s Always Sunny in Philadelphia, among many other works.

He is the son of Julia (Moccello) and Daniel DeVito. All of his grandparents were Italian. Danny was raised a Catholic. He owns an Italian restuarant in Miami Beach, Florida. Danny is married to actress and writer Rhea Perlman, with whom he has three children, including actress Lucy DeVito. He is 4’10”.

My family comes from San Fele [Province of Potenza, Basilicata], in southern Italy, and growing up in Asbury Park, New Jersey, my house was always filled with relatives from the old country –sleeping in chairs, eating, and drinking my uncle’s homemade red wine… My mother made regional Italian dishes with lots of vegetables — fennel, broccoli, dandelion greens. From the time my kids were born, I couldn’t wait to bring them to Italy and expose them to their ancestry and culture.

Danny’s paternal grandfather was Michael/Michele/Michelo DeVito (the son of Prospero Vincenzo DeVito and Filomena Abarno). Michele was born in San Felè, Potenza, Basilicata. Prospero was the son of Sebastiano DeVito and Maria Lucia Delorenzo/Lorenzo. Filomena was the daughter of Vito Michele Abarno and Margherita Tomasulo.