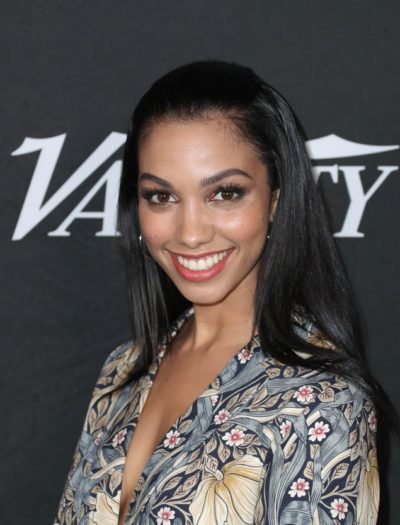 Corinne Foxx is an American model and actress. She is one of the stars of the film 47 Meters Down: Uncaged. She is the daughter of Connie, a military veteran, and actor, singer, songwriter, and comedian Jamie Foxx.

Corinne’s father is African-American. Her mother is of German, and some Scottish, English, and Swiss-German, ancestry.

Corinne’s paternal grandfather is named Shahid Abdula. Shahid was born Darrell Bishop, and changed his name after converting to Islam.

Corinne’s maternal grandfather is Henry J. Kline (the daughter of Leo C. Kline and Agnes Lillian Eberz). Leo was born in Pennsylvania, to German parents. Agnes was the daughter of Henry Joseph Eberz, who was German, and of Agnes Philomena Buchmann, who was born in Ohio, to a Swiss-born father and to a mother of German descent.