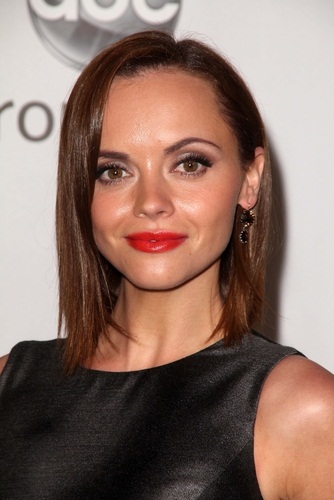 Christina Ricci is an American actress. She has starred in the films Mermaids, The Addams Family (as Wednesday Addams), Now and Then, Casper (1995), Sleepy Hollow, The Ice Storm, Buffalo ’66, Pecker, The Opposite of Sex, Prozac Nation, Pumpkin, Anything Else, Monster, Cursed, Black Snake Moan, and Speed Racer, and on the show Yellowjackets, among other works. She is the national spokesperson for the Rape, Abuse & Incest National Network (RAINN).

Christina is the daughter of Sarah and Ralph Ricci. She was raised partly in Montclair, New Jersey. She has stated:

The Italian blood has been bred out of me. There’s an Italian four or five generations back who married an Irish woman and they all had sons. So they married more Irish women, there were more sons, and more Irish women. Now I’m basically Scots-Irish.

In fact, Christina’s father is of half Italian ancestry. The rest of her lineage is at least five eighths Irish.

Christina is married to hairstylist Mark Hampton. She has a son with her former husband, dolly grip James Heerdegen; and a daughter with Mark.

Christina’s paternal grandfather was Victor Edward Ricci (the son of Henry Ricci and Valentina Fiorentino/Fiorentini). Victor was born in New York, to Italian parents, from Aulla, Province of Massa and Carrara, Tuscany.

Christina’s maternal grandmother was Mary Alice Keaveny (the daughter of Francis Keaveny and Ann McGowan). Mary was born in Ireland, or in New Jersey, of Irish parentage.

Sources: Genealogy of Christina Ricci (focusing on her father’s side) – https://www.geni.com