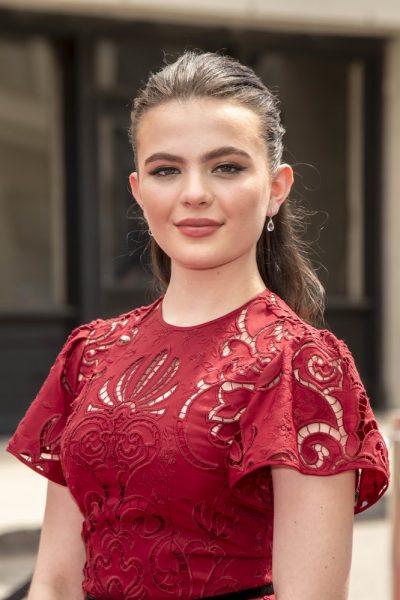 Chiara Aurelia is an American actress, singer, dancer, and model. She is known for her roles on the show Cruel Summer and the film Fear Street Part Two: 1978.

Chiara’s father was born in Leuven, Belgium, and was of Flemish and Walloon origin, from a prominent family, including the Barons Empain. Through her father, Chiara is a direct descendant, several times over, of Flemish artist and diplomat Peter Paul Rubens (1577-1640). Peter Paul was born in Siegen, Nassau-Dillenburg, Holy Roman Empire.

Chiara’s mother, who is American, is the daughter of Ashkenazi Jewish parents. Through her, Chiara is the granddaughter of singer and actor Tony Travis, and great-granddaughter of philanthropist S. Mark Taper.

Chiara’s maternal grandfather was actor and singer Tony Travis (born Travis Richard Kleefeld; the son of Sidney Kleefeld and Sylvia Goldstein). Tony was born in New York. A picture of Tony can be seen here. Sidney was the son of German Jewish parents, Leopold Kleefeld and Lena Schiff. Sylvia was the daughter of Isaac Goldstein, whose parents were Russian Jews, and of Mollie Finkelstein, who was a Russian Jew.

Chiara’s maternal grandmother is Carolyn Mary Taper (the daughter of S. Mark Taper, Sydney Mark Taper, and of Amelia Lewis). Chiara’s grandmother Carolyn was born in Lewisham, London, England. Chiara’s great-grandfather S. Mark was a prominent financier, real estate developer, and philanthropist, for whom the Mark Taper Forum, stage is named. He was a Polish Jewish immigrant, first to England, and later to Los Angeles. Chiara’s great-grandmother Amelia was also the daughter of Jewish parents, Lewis A. Lewis and Florence Hobinstock. She had roots in Poznan, Poznań County, Wielkopolskie, Poland.

Sources: Genealogy of Chiara Aurelia (focusing on her father’s side) – https://gw.geneanet.org