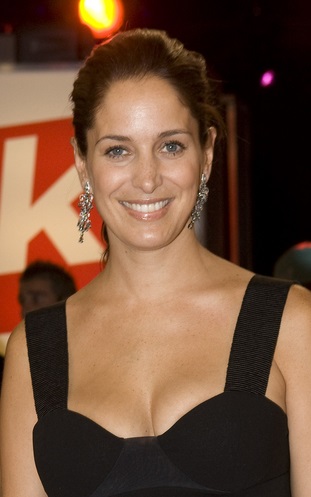 Kreviazuk in 2008, photo by prphotos.com

Chantal Kreviazuk is a Canadian singer, songwriter, composer, pianist, and actress. She is the daughter of Carol (Walaschuk) and John Kreviazuk. She is married to musician Raine Maida, with whom she has three children.

Her mother is of Ukrainian, Scottish, English, Polish, and some Saulteaux Native Canadian, descent, and her father also has Ukrainian, and possibly other, ancestry. Chantal appeared on an episode of the Canadian version of genealogy television show Who Do You Think You Are? in 2007, and traced her ancestry.

Two of Chantal’s paternal great-grandparents, Nicholas Kreviazuk and Annie Uskiw, were born in Galicia, now Ukraine, and moved to Canada in 1906. Nicholas was originally raised Christian Orthodox, and converted to Presbyterianism in Canada.

Chantal is a second cousin of curler and 2013 Scotties Tournament of Hearts champion Alison Kreviazuk.

Chantal’s maternal grandfather was Walter Walaschuk/Woloszczuk (the son of Joannes Woloszczuk and Anastasia Adamchuk). Walter was born in Winnipeg, Manitoba, Canada. Joannes was originally from Bohorodchany, Galicia, now Ukraine, and was the son of Onofrius Woloszczuk and Maria Biliczak, who was likely of Polish origin, the daughter of Peter Biliczak and Catherine Pawlowska. Chantal’s great-grandmother Anastasia Adamchuk was of Ukrainian origin.

Chantal’s maternal grandmother was Isabel/Isobel Bella Slater Freeman (the daughter of George Thomas Freeman and Alice May Slater or Cook). Isabel was born in St. Andrews, Manitoba, of Scottish, from the Orkney Islands, English, and Saulteaux First Nations roots. George was the son of Thomas Freeman and Elizabeth. Alice was the daughter of William Slater and Catherine Cook.

Isabel’s indigenous ancestry can be traced back to a woman named Mary Suzette Demoran or Mith-coo-coo-man-E’Squew Cocking, who was born in the Red Lake Indian Reservation, to Saulteaux Native parents. She is Chantal’s fourth great-grandmother.

Genealogy of Chantal Kreviazuk (focusing on her mother’s side) – https://www.geni.com

Chantal Kreviazuk on Who Do You Think You Are?, 2007 – https://www.youtube.com