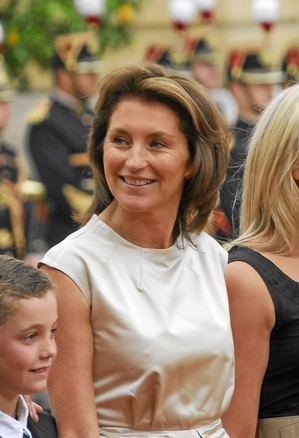 Cécilia Attias is a French model and public relations executive.

Cécilia is the daughter of Diane Teresita (Albéniz de Swert) and André Ciganer (born Aron Chouganov). Her father was born in Bălți, Moldova.

Cécilia is married to Moroccan events producer Richard Attias, the executive chairman of Richard Attias and Associates, who is Jewish. She has two children with her former husband, French television host and producer Jacques Martin; and a son with her former husband, politician, and former French president, Nicolas Sarkozy. She was Spouse of the President of France in 2007, while married to Nicolas.

Cécilia’s father has been described as descended from various ethnic groups (Russian Jewish, Russian-Romanian, Romani, among others).

Given Cécilia’s father’s birth surname, Chouganov, he was more likely of Russian or Jewish descent than Moldovan/Romanian. Her father’s adopted name, Ciganer, can mean Romani. It is not clear if her father had any connection to the name before changing his birth name.

Cécilia’s maternal grandfather was Alfonso Albéniz Jordana (the son of Isaac Albéniz and Rosina Jordana y Lagarriga). Alfonso was a diplomat, and was born in Barcelona, Catalonia, Spain. Isaac was born Isaac Manuel Francisco Albéniz i Pascual, and was a pianist and composer. He was born in Camprodon, Girona, Spain, and was the son of Ángel Lucio Albéniz Gauna, who was born in Vitoria-Gasteiz, Alava, Spain, and of María de los Dolores Pascual.

Sources: Genealogies of Cécilia Attias (focusing on her mother’s side) – https://www.geni.com
http://wc.rootsweb.ancestry.com