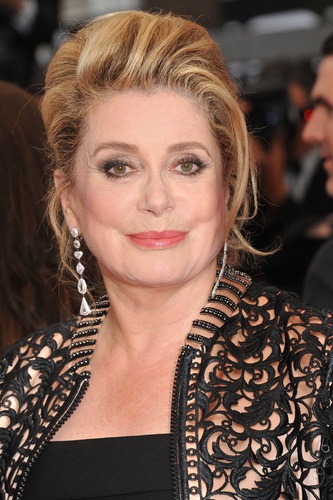 Catherine Deneuve is a French actress, singer, model, and producer. She is fluent in French, Italian, and English, and is semi-fluent in German. She has starred in the films The Umbrellas of Cherbourg, Belle de Jour, Tristana, and Indochine, among many others.

Her sister was actress Françoise Dorléac.

Catherine’s paternal grandfather was Alphonse Dorleac (the son of Gabriel Jean Dorleac and Armance Landry). Alphonse was born in Paris. Gabriel was the son of Jean Vedian Dorleac and Jeanne Marie Bouffartigue. Armance was the daughter of Louis Landry and Françoise Marguerite Chamot.

Catherine’s paternal grandmother was Berthe Marie Smout (the daughter of Rodolphe Smout and Alexandrine Jaquet). Berthe was born in Paris. Rodolphe was the son of Marie-Elisabeth Joseph Smout.