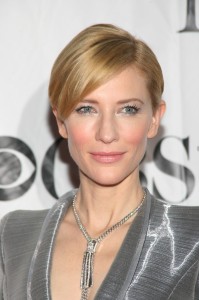 Blanchett in 2010, photo by PrPhotos

Cate Blanchett is an Australian actress and theatre director. She won the Academy Award for Best Supporting Actress for The Aviator (2004), and the Academy Award for Best Actress for Blue Jasmine (2013). Her roles also include Elizabeth and its sequel, An Ideal Husband, The Talented Mr. Ripley, The Gift, The Shipping News, Charlotte Gray, The Lord of the Rings, Veronica Guerin, The Missing, Babel, Notes on a Scandal, I’m Not There, Indiana Jones and the Kingdom of the Crystal Skull, Robin Hood, Hanna, Knight of Cups, Cinderella, Carol, Truth, The House with a Clock in Its Walls, Don’t Look Up, Nightmare Alley, and Tár, among other films.

Her mother, June, was Australian, and was a property developer and teacher. Her father, Robert Blanchett, was American, from Texas, and was an advertising executive and U.S. Navy Chief Petty Officer. Cate is married to playwright, screenwriter, and director Andrew Upton, with whom she has four children.

The surname Blanchett is often assumed to be of French origin. Cate’s last traceable patrilineal ancestor appears to be James G. Blanchett, who was born, c. 1810, in North Carolina. It is not clear if James had French ancestry. Cate does have French roots from her paternal nine times great-grandmother, Martha Brasseur, making Cate of at least 1/2048th French ancestry, through that line.

Cate’s paternal grandmother was Merle Jenevieve King (the daughter of Jasper Noel King and Cora A. Craft/Croft). Merle was born in Oklahoma. Jasper was the son of Thomas F. King and Frances/Fannie B. Henderson. Cora was the daughter of John Franklin Craft and Mary Elizabeth McWherter/McWhirter.

Cate’s maternal grandfather was Horace Thomas Gamble (the son of Morris Frederick Horsley Gamble and Anne/Ann Maud Maule). Horace was born in Sunbury, Victoria, Australia. Morris was the son of Walter Mitchell Gamble, who was Northern Irish, and of Marianne Barker, who was born in London, England. Anne was the daughter of Scottish parents, Thomas Hunter Maule and Janet Catherine Reid, from Melrose, Roxburghshire.

Genealogy of Cate Blanchett (focusing on her father’s side) – http://www.wikitree.com