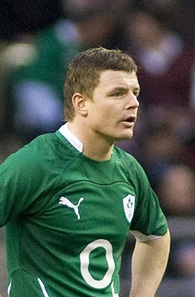 O’Driscoll in 2010, photo by sportsphotographer.eu/www.bigstockphoto.com

Brian O’Driscoll is an Irish professional rugby union player. He has captained Ireland, from 2003 to 2012, and the British and Irish Lions for their 2005 tour of New Zealand. Brian is regarded by some commentators as one of the greatest rugby union players of all time.

Brian is the son of Geraldine and Frank O’Driscoll. His father is a rugby union player, as are Brian’s first cousins, once removed, Barry O’Driscoll and John O’Driscoll. Brian is married to Irish actress Amy Huberman, with whom he has three children. His paternal grandparents were from Maulatrahane near Skibbereen, County Cork.