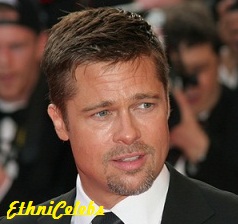 Brad Pitt is an American actor and film producer. He won the Academy Award for Best Supporting Actor for Once Upon a Time… in Hollywood (2019). He has starred in the films A River Runs Through It, Interview with the Vampire, Legends of the Fall, Fight Club, and Inglourious Basterds, among many others.

He was born in Shawnee, Oklahoma, the son of Jane Etta (Hillhouse) and William Alvin “Bill” Pitt, and was raised in Springfield, Missouri. He was raised a Baptist, but no longer practices the religion. Brad has six children with his former wife, actress, humanitarian, and activist Angelina Jolie. His brother is businessperson and philanthropist Douglas Pitt. Brad was selected People Magazine’s “Sexiest Man Alive” in 1995, and again in 2000.

Brad’s paternal grandfather was Alvin Monroe Pitt (the son of Oliver Brown Pitt and Rosalee “Rosie”/Rosa Lee Dorris). Alvin was born in Oklahoma. Oliver was the son of Thomas M. Pitt and Bell Ray. Rosa was the daughter of George W. Dorris/Doris and Nancy Rosalee/Rosalene Smith.

Brad’s paternal grandmother was Elizabeth Jean “Bettie” Brown (the daughter of Lester Benny Brown and Una Valerie Coker). Elizabeth was born in Oklahoma. Lester was the son of George W. Brown and Cynthia Martin. Una was the daughter of Richard Ogle Coker, whose father was a Christian minister, and of Laura Trotter.