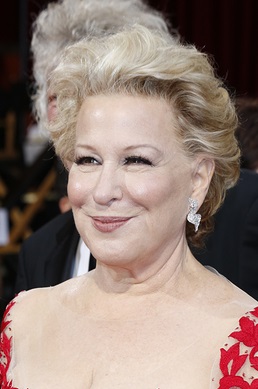 Midler in 2014, photo by Joe Seer/Bigstock.com

Bette Midler is an American singer, songwriter, actress, comedian, and producer. Her roles include The Rose, Down and Out in Beverly Hills, Ruthless People, Hocus Pocus, The First Wives Club, and Then She Found Me. She is known as “The Divine Miss M.”

Bette is the daughter of Ruth (Schindel) and Fred Midler. She was born and raised in Honolulu, Hawaii, to parents originally from New Jersey. Her family is Jewish (from Russia, Poland, Austria-Hungary, and Lithuania). She was named after actress Bette Davis, though pronounces her name a different way.

Bette’s paternal grandmother was Minnie Friedman/Fortz (who was evidently the daughter of Mayer Fortz and Feigel Cohen). Minnie was a Jewish emigrant from Poland or Lithuania.