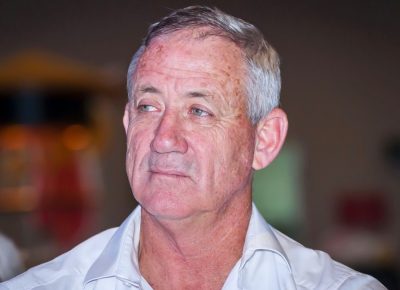 Gantz in 2017, photo by Roman Yanushevsky/Bigstock.com

Benny Gantz is an Israeli soldier and politician. He has served as Minister of Defense, since 2020, and Minister of Justice, and Deputy Prime Minister, both, since 2021. He has also been Chief of the General Staff, from 2011 to 2015, and Speaker of the Knesset, in 2020.

He is the son of Malka and Nahum/Nachum Gantz. His father was a Romanian Jew. His mother was a Hungarian Jew, from Mezőkovácsháza. She survived the Holocaust. His parents were among the co-founders of the Moshav Kfar Ahim, a cooperative agricultural community in south-central Israel. He has Austrian Jewish, Polish Jewish, Moravian Jewish, and Alsatian Jewish ancestry farther back.

He is married to Revital Aloni, and has four children.

Benny’s paternal grandfather was Aryeh Ganz (the son of Lipot Ganz and Ester). Aryeh was born in Săcel, Maramures, Romania. He was killed by the Nazis in 1944.