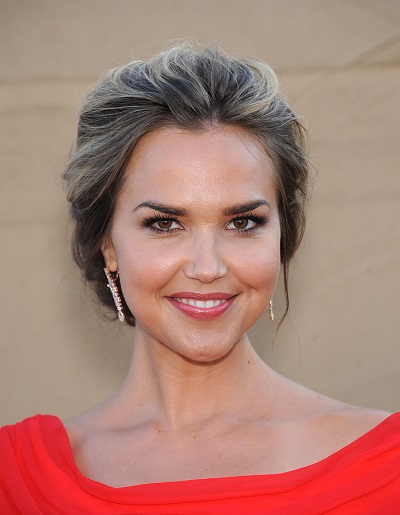 Kebbel in 2013, photo by DFree/Bigstock.com

Arielle Kebbel is an American actress and model. Her roles include John Tucker Must Die, The Grudge 2, Aquamarine, and The Uninvited, among many other films, and series.

Her mother Sheri is a talent manager.

Arielle’s paternal grandfather was William R. Kebbel (the son of Friedrich Otto “Fred” Kebbel and Anna S. Marchert). William was born in Illinois, the son of ethnic German emigrants, from Poland/Lithuania. Friedrich was the son of August Friedrich Kebbel and Bertha Auguste Feitusch. Anna was the daughter of Josef Marchert and Helene Magdalene Kebbel.

Arielle’s maternal grandmother was Ann Caroline Gorham (the daughter of Leonard C. Gorham and Caroline M. Kast). Ann was born in Alexandria, Virginia. Leonard was born in Virginia, the son of Samuel Gorham, who had English ancestry, and of Elizabeth C. Krause, who was of German descent. Arielle’s great-grandmother Caroline was born in Washington, D.C., the daughter of Frank Charles Kast, Sr. and Mary Catherine Schlag, who were of German origin.