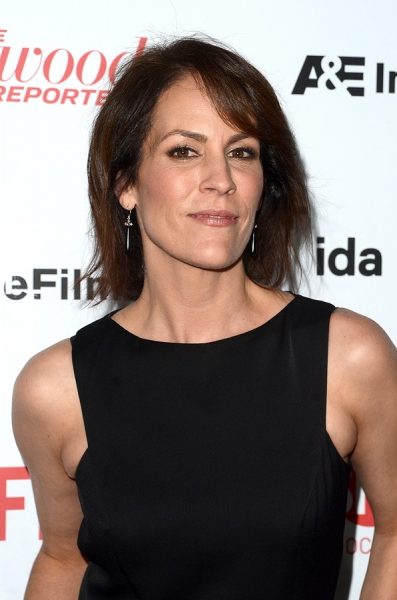 Gish in 2016, photo by kathclick/Bigstock.com

Annabeth Gish is an American actress. She is known for playing Monica Reyes on The X-Files, and for her work in the films Shag (1989), Hiding Out (1987), Mystic Pizza, and The Last Supper, and the series Sons of Anarchy and The Haunting of Hill House, among other titles.

Her parents are mostly of English, German, French, Irish, Scottish, Scots-Irish/Northern Irish, and some Swiss-German descent. Her father also has relatively recent Cherokee Native American ancestry. She was raised in Cedar Falls, in Iowa, where her father was an English professor. Annabeth is married to stunt person Wade Allen, with whom she has two children.

Regarding her surname, she has stated:

I am a member of a completely different Gish family. […] I’m no relation to Lillian or Dorothy Gish. Not even way back.

Annabeth’s paternal grandmother was Lillian J. Fields (the daughter of James H. “Jim” Fields and Frona/Fronia R. Kelly). Lillian was born in Oklahoma. According to her obituary, she was “an original Dawes Roll enrolled in the Cherokee Nation.” James was born in Oklahoma, the son of Timothy Richard “Tim” Fields, who was listed as Indian on the 1900, 1910, 1920, and 1930 U.S. Censuses; and of Laura Jane Hampton, whose parents were listed as white. Frona was born in Arkansas, and was listed as white.

Annabeth’s maternal grandmother was Esther/Ester V. Duckers (the daughter of Charles Leonard “Charlie” Duckers and Sadie Belle Zumwalt). Esther was born in either Kansas or Montana. Charles was born in Kansas, to English parents, John Duckers and Clara Anne Grafton. Sadie was born in Texas, the daughter of William A. Zumwalt and Sarah Elizabeth Faver.